The Conference of Birds by Habiballah 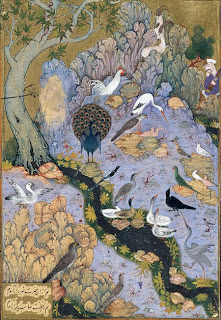 This painting illustrates the beginning of Attar's mystic allegory where the birds begin their pilgrimage in search of the Simurgh (representing ultimate spiritual unity). Under the leadership of the hoopoe (perched on a rock at center right), who exhorts them to be steadfast and unwavering in their joint quest, the birds ultimately learn that they are identical to the Simurgh (which means 'thirty birds'). This illustration depicts a scene from the mystical poem "Mantiq al-tair" (The Language of the Birds), composed by the twelfth-century Iranian Farid al-din `Attar. The birds symbolize individual souls in search of the Simurgh (a mystical bird representing ultimate spiritual unity) and are assembled here to begin their pilgrimage under the leadership of the hoopoe (perched on a rock at center right). The idyllic landscape in which the birds have congregated appears to be in harmony with the late-fifteenth-century Timurid miniatures in the manuscript. The hunter carrying a matchlock (firearm), which is irrelevant to the story, was a popular motif at that time. In contrast, the tree with a snake climbing toward a bird's nest may have been inspired by the same motif on another Timurid folio page. The motif of goats on a mountain is also typical of Timurid paintings. Probably Habiballah used these Timurid motifs to visually align the additional Safavid illustrations to the original Timurid pages.


My Interpretation
What I first see when I look at this painting is a winding river, surrounded by trees and shrubs along its river bank, speckled with birds feeding on its nourishment.  The red of the birds' beaks and the green foliage pop.  I tried to capture that river in my vast selection of beads, and I think I found it in this gorgeous lamp work bead by Kelley Ford Wenzel, which she aptly named "Desert Creek".  Though my picture may not truly show the colors of her bead, there is a tinge of blue-green swirl, which is reflected in the blue-green of this sweet little lamp work bird, by Elise Thomas. 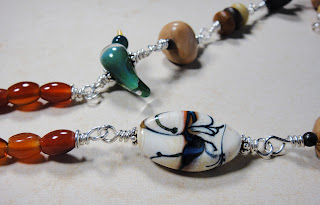 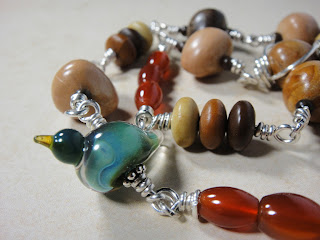 The red beaks of the birds in the original painting are also reflected in Kelley's focal bead, which I accented throughout the necklace with red agate beads. 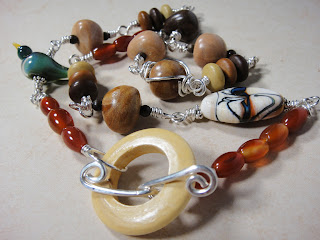 I wire wrapped some vintage resin "wooden" beads that mimic the towering tree and earth-toned shrubs in the surrounding landscape of the original painting.  I used a simple wooden donut and sterling silver wire to create the clasp.  This is another asymmetrical design from me, with the clasp worn to the side, in the front.  This was a challenge for me - way out of my comfort zone.  But....I kinda like it! 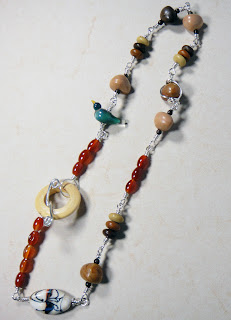 Proceeds from my sales are donated to Miracle Horse Rescue 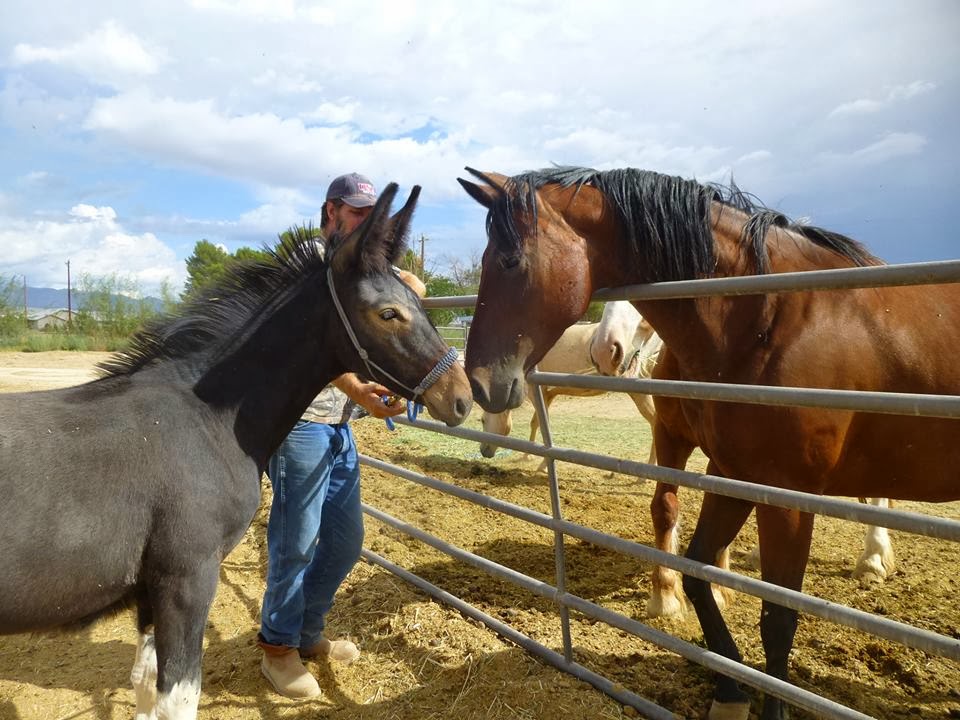